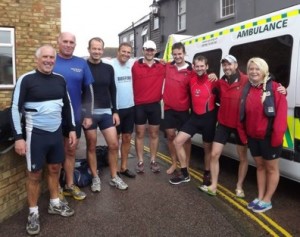 The vets crew made the 580 mile round trip to Deal in Kent for  the South Coast Championships on Saturday 14 September. They raced there after winning the West of England veteran championship at Bideford Regatta previously that month. They were up against the champions and runners up from Hants and Dorset and the Coast associations to see who would become the champions of the South Coast.

The crew rowed in coast boats which are shorter and much wider for the conditions the English Channel can present. The Blues came fifth in the final after lying fourth, they were a length behind second and third place up to 1500m mark when a couple of large waves stopped them dead in the water and nearly sank them.  After this it was just a case of making it to the finish line without sinking . The conditions continued to deteriorate further with only three more races taking place before the event was called off.