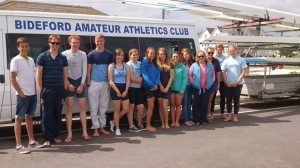 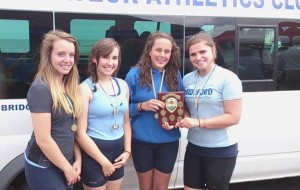 Blues crews made a great start to Paignton Regatta on Saturday, having a 9:30 start so as to miss the wash off of the many pleasure boats that use the area where the course is rowed.

It was the women’s junior 16 quad of Shelby May, Charlotte Berry, Kirsy Snow and Abie Lawson claiming their first victory of the season with a win over home town rivals the Reds.

Keeping the club in winning ways on the day were the mixed senior b four of Hannah Myers, Alice Jackson , Milo George and Owen Winter who dominated their race winning from a strong Dartmouth four.

Also picking up silver ware were the women’s novice quad of Tina Robertson , Annie Cook, Hannah and Jessica Myers in a three boat final against Dart Totnes and the Reds.

With conditions now getting choppy it was down to the the mixed junior 18 quad to secure the clubs last victory on the day with Zoe Robertson, Charlie White, Declan Monaghan and Kirsty Snow coming home ahead of Paignton to take this final.