Schools Head of the River 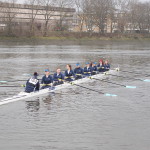 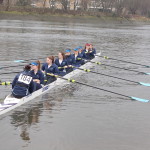 On Monday 16 March eight students from Bideford College travelled to London to take part in the Schools Head of the River.

The race is the largest head race of the winter season for junior crews and attracts over 300 crews.

The 7 kilometre course started at Chiswick Bridge and finished in Putney and is the actual course for the famous Oxford and Cambridge annual boat race although is rowed in the opposite direction.

It was the first time all eight girls had rowed together in an eights boat and they finished in a very impressive 23 minutes 22 seconds.

The girls faced some very tough competition from very experienced crews but they rose to the challenge with ease and were a real credit to Bideford College and both rowing clubs.