Saturday 24 August was Torquay Regatta at Hollicombe beach half way between Torquay and Paignton. The conditions were very sunny but with a strong offshore wind blowing, this made the start area difficult for lining up in the early races.

Not long into the programme of races the umpires shortened the course to 800m to take advantage of the shelter of cliffs at Livermead point. The Blues had a small squad completing with the ladies junior 16 quad of Shannon Monaghan, Charlottie Berry, Kirsty Snow, Abie Lawson and cox Colin Pennington racing first.

They lined up with current championship leaders Bideford Reds and Plymouth, the Blues made a great start pulling out to half a length in the first 100m. They continued to row away from the Reds over the course and finished three lengths up on them. This has now put the two Bideford crews joint top of the championship with two regattas remaining. The girls had a quick turn around to next race in the ladies junior 16 doubles with Abie joining Shelby May and Kirsty and Charlotte doubling together, with the latter finishing 2nd and the other girls coming fifth.

Next was the mens masters coxed four of Colin and Neil Pennington, Nigel Cann , Nick Cleasby from the Torquay rowing club and Chloe Pennington as cox , they were racing against Teign Scullers from Teignmouth. The Blues won quite comfortably with a easily verdict. Last out for the club was Declan Monaghan in the men’s junior 16 sculls, with conditions now very choppy he managed a creditable 4th in a field of six. Next is Dartmouth Regatta on Thursday 29 August. 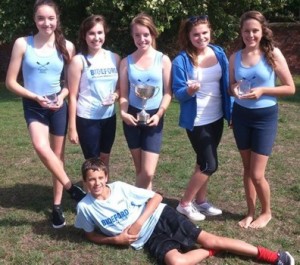