Crews from Bideford Blues made the long journey to Herne Bay in Kent this weekend for the 60th South Coast Rowing Championships and 11th South Coast Junior Regatta. It was the first time the Blues coastal boat had been used in a regatta, but the boat sponsored by the Bideford Bridge Trust and By the Ford butchers certainly didn’t let the crews down.

A very impressive first place went to the young under 14 quad. The crew of Charlie Colwill, Jack Berry, Toby Evans, Nell Gierke and cox Tina Cox stormed home to win their first ever attempt at this level. It was certainly a good result for Toby who travelled back from Germany to attend the regatta.

It was third place for Matt Colwill, Brian Andrews, Nick Dualibi-Wilson, Declan Monaghan and cox Charlie Colwill in the men’s junior championship. They put in a very good performance to gain their third place as once again it was their first time in competing in such high standards of rowing.

Declan Monaghan stepped out of the boat for Dan Talbot to join the crew and take part in the men’s junior / senior championship race. This time, despite an excellent performance the crew settled for fifth place. A very good performance in both races.

It was also fifth place for the ladies junior championship crew. The crew of Charlotte Berry, Kirsty Snow, Shannon Monaghan, Shelby May and Charlie Colwill cox fought hard in what was a very tight race.

It was the perfect end to the rowing season for Bideford Blues. On their own water they claimed ten first positions, championship of the river and the all important Billy Little cup. This cup is given to one of the two local clubs, the Blues or the Reds and is won by the club with the most points on the day.
It was celebrations for Shannon Monaghan, Charlotte Berry, Shelby May, Kirsty Snow and Zoe Robertson (cox). Not only did they cruise through to win the ladies senior C but they went onto win the ladies junior 18 fours resulting in them winning the ladies junior 18 championship for the second year in a row and also securing their place in next week’s junior championship race at Herne Bay. Other crews that won the championship for their categories were the junior 14 quad crew, ladies novice, Alex Dualibi-Wilson in the junior 16 single scull, men’s junior 16 quad and men’s senior C. All these rowers will be joining the ladies junior 18’s at Herne Bay next weekend.

It was excellent conditions for this year’s Dartmouth Royal Regatta. Four firsts, six seconds and three thirds for the club was a fantastic result at the regatta which play host to crews from as far a field as Bexhill, Oxford and Shoreham.

After returning from Paignton Regatta on the Saturday, the wins continued on Sunday at Appledore regatta with eight firsts, six seconds and three thirds.

It was a fantastic weekend for the Bideford Blues rowers this weekend, with sunshine, lots of wins and a birthday celebration thrown into the mix.
On Saturday the club travelled to Paignton for their annual regatta returning back to home waters on Sunday for the Appledore regatta.
Conditions were surprisingly good for Paignton with the sun shining all day, the club came away with six first places and even had time to celebrate the club’s President, Barrie White’s, 70th birthday.
It was success for the Colwill family with Dad Matt winning his first senior C race of the season at Appledore whilst Mum Lorna and son Charlie had two wins each over the weekend.

A group of rowers from Bideford Blues travelled to Falmouth on Saturday to take part in the annual regatta. They managed to bring home four wins despite the conditions being wet and windy.
First place
Under 18s junior ladies of Kirsty Snow, Charlotte Berry, Shelby May, Shannon Monaghue with Tina Robertson (cox).
Under 16s men’s quad – Jasper Beer, Lucas Wilson, Jamie Norton and Toby Evans. It was a great performance by Toby who stepped up from the under 14’s to fill in.
Junior 14s quad – Jack Berry, Toby Evans, Charlie Smale, Nell Gierke and Tina Robertson (cox).
Men’s under 16 scull – Jamie Norton.

Crews from the Bideford Amateur Athletic Club travelled to Exeter this weekend to take part in the 2016 City of Exeter Regatta. Good conditions welcomed the crews for the 400m sprint course.

The club had a very successful day notching up eight wins and some pretty impressive performances.

The women’s junior 14 coxed quad had their first ever win. The crew of Nell Geirke, Charlie Smale, Sadhbh Connor, Joanna Grigg and Cox Tina Robertson had a fantastic race and showed their hard work has paid off.

It was hard work and bad luck for the women’s senior C four crew of Charlotte Berry, Kirsty Snow, Shelby May, Hannah Myers and cox Zoe Robertson. The girls got through to the repechage and twice had a dead heat, with Exeter finally finishing ahead on the third race to reach the final.

With a few rowers missing from this weekend’s regatta due to other commitments the remaining Blues crews took to the water at Plymouth and put in yet another fantastic performance, results are as follows:
First place
Junior 14s fours – Charlie Colwill, Toby Evans, Jack Berry and Nell Gierke
Novice Mixed – Dave Bates, Renata Dualibi- Wilson, Dan Talbot and Sam Dolby 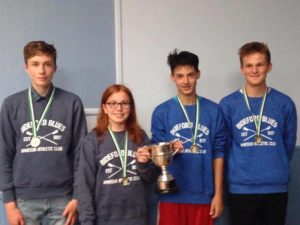 It was two days of rowing this weekend for Bideford Blues who travelled to Totnes to take part in their annual regatta.

The men’s open doubles had to settle for second position following a clash in the first attempt of the race. The pair, Charlie White and Nick Dualibi-Wilson were taking an early lead in the race but unfortunately a clash of crews further down the race meant a re-row, this time the Blues having to take second place to Totnes.

On Sunday the club notched up two firsts, five seconds and two thirds.

It was the young men’s junior 16 fours who earnt the title of race of the day which resulted in a win for the youngsters, but only just. The crew of James Jordan, Alex Dualibi-Wilson, Jasper Beer and Jamie Norton (who made his first competitive appearance) along with cox Hannah Myers had to fight for the line and nudge ahead of Totnes. Alex went on to win his junior 16 scull race.

It was third for the women’s novice fours and men’s junior 14 fours.

It was a trip to Nottingham for the British Master’s Championship for Dave Byrnes and Alistair Peake who took part in the D doubles race. They won their heat but narrowly missed out to Wallingford in the final and had to settle for second place. 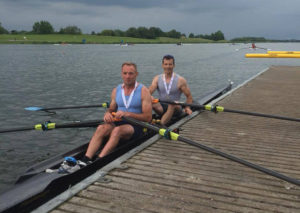 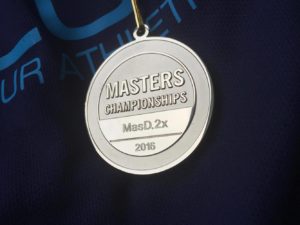