Ten firsts, five seconds, four thirds and Championship of the lake meant a very successful first regatta of the season for the Bideford Blues on Saturday.

Third places:
Ladies novice sculls – Shannon Monaghan
Ladies junior 14 4’s – Nell Geirke, Charlie Smale, Sive Connor and Matilda Pike – It was the first ever race for this crew who were unfortunate to catch a crab on the way up but still managed to hold onto third place
Men’s senior C scull -Declan Monaghan
Ladies junior 14 scull – Charlie Smale – First time in a scull race for Charlie who put in a solid performance 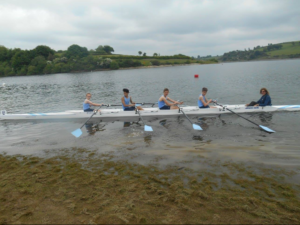 A fantastic day of rowing for all the Blues crews whose points meant they secured the Championship of the lake, this is the first time the club has won this event at Wimbleball.

It was 3rd place for the junior coxed quad crew in a very tight race where only three seconds separated the top three crews. The crew of Jack Berry, Toby Evans, Charlie Colwill, Nell Gierke and Kirsty Snow (cox) narrowly missed out on the top spot which proved to be one of the most exciting races of the day.

It was also 3rd place for James Jordan and Alex Dualibi-Wilson in the double sculls B final. The boys put in a very impressive performance on the 1500m course. 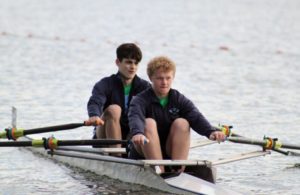 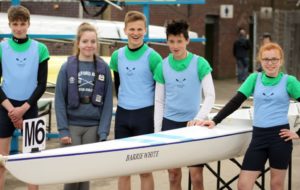 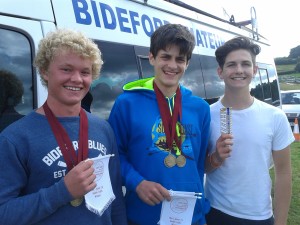 It was the 59th South Coast Rowing Championship Regatta this weekend held at Wimbleball Lake.

The Bideford Blues ladies under 18 crew of Shannon Monaghan, Charlotte Berry, Shelby May and Kirsty Snow were invited to compete in the ladies senior C championship race. They faced very strong competition from Hants and Dorset crews but put on a fantastic performance and finished a very creditable 3rd place.

In the men’s junior 18 coxed fours race the scratch crew were also 3rd.

On Sunday it was the turn of the younger rowers at the South Coast under 16 rowing regatta also held at Wimbleball. The conditions were dry but windy for the youngsters but that didn’t seem to cause any problems.

This was a great weekend of rowing to finish off the very successful season for the Blues. 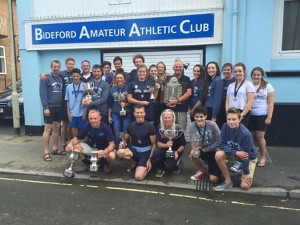 It was a fantastic end to the rowing season for the Bideford Blues rowers this weekend with outstanding performances on their home water.

Following on from the success of Dartmouth regatta the club not only gained 13 first positions, 7 second place and 3 thirds, they also won the Billy Little cup and the Grimes Perpetual Trophy. The Billy Little cup is awarded to the local club (Bideford Reds or Bideford Blues) who has the most points on the day whilst the Grimes Trophy is presented to the overall champions of the river.

All rowers put on an excellent performances, especially the two under 14 crews who were rowing their first regatta after having only six months of training.

Although this was the last regatta of the season some crews will be making the short trip to Wimbleball Lake next week for the South Coast Championships. Crews include the men’s veterans, men’s novice, ladies under 18’s / senior C and Alex Dualibi-Wilson and James Jordan in the pairs and scull races.

Crews from all over the south of the country came and took part in the largest regatta of the season at Dartmouth on Thursday. After an unsettled week the sun shone and so did the Bideford Blues bringing home six wins, two second places and two thirds.

The race of the day had to be the men’s novice double scull race. Alex Dualibi-Wilson and James Jordan faced tough competition and looked to be having to settle for second place, however, keeping cool heads and rowing strong the boys battled back and came home in first place.

The veteran crew of Colin Pennington, Steve Clements, Nigel Cann, Neil Pennington and Chloe Pennington (cox) had to settle for third place as did the ladies senior A fours crew of Zoe Robertson, Annie Cook, Shelby May, Kirsty Snow with Tina Robertson (cox).

It was a disappointing day on Saturday for the Blues rowers who travelled to Paignton and only managed a few 2nd and 3rd positions before the regatta was cancelled because of high winds and rough sea conditions.

It was a different story on Sunday when the crews travelled back to home territory and took part in the Appledore and Instow regatta notching up eleven wins, four second positions and three thirds.

The wins came from the men’s senior B fours race with Dave Bates, Dave Powe, Dave Burton and Alastair Peake who won by quite a distance. Lucas Wilson won the men’s junior 15 sculls race, next was the mixed senior B crew of Zoe Robertson, Annie Cook, Dave Byrnes, Milo George and Tina Robertson (cox). Annie Cook went on to win the women’s senior C scull race.

The club narrowly missed out on the championship of the river to Plymouth Rowing Club. All in all a very successful day of rowing for the club. 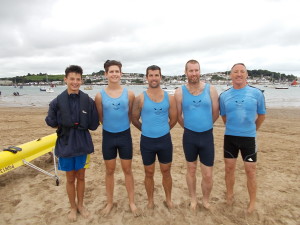 This weekend saw rowers from the Bideford Amateur Athletic Club travel to Totnes for the annual regatta. Although Saturday offered sunshine for the sprint events it was wet and windy conditions that the welcomed the club for the WEARA Championship event on Sunday. Fortunately this didn’t dampen the rower’s performance.

It was just the one win for the club on Saturday with Alex Dualibi-Wilson winning the junior 15 sculls race.

On Sunday, with Neil Pennington still on holiday Dave Byrnes once again stepped into the men’s master’s crew. He was joined by Steve Clements, Nigel Cann, Colin Pennington and Chloe Pennington (cox) and came home in 1st place.

Kirsty and Shelby along with Annie Cook, Zoe Robertson and Tina Robertson (cox) stepped up three categories and took part in the women’s senior A fours race. Two of the crew are still under 18 but they put on a very good performance and came home in 2nd place.

It was also 2nd place for Declan Monaghue in the men’s novice scull race.

It was 1st place again for the under 18 ladies crew of Charlotte Berry, Kirsty Snow, Shelby May, Jo Moulder and Tina Robertson (cox). The girls went on to compete in the ladies senior C race, putting in a very strong performance and coming home in 3rd place.

Also coming home in 1st place was James Jordan and Alex Dualibi-Wilson in the under 15 junior race.

It was 4th place for the men’s novice crew whilst the men’s senior C crew had to settle for 5th position.

This Sunday was the christening of a new coastal rowing boat which is to be used as a training aid for the junior rowers of the Bideford Amateur Athletic Club.

The boat was supported by the Bideford Bridge Trust along with sponsorship by local butcher’s By the Ford of the High Street, Bideford.

The boat was officially named By The Ford by Tina Robertson (owner of By the Ford butchers) and Alice Jackson who started her rowing career as a junior rower at the Bideford Blues and has now gone on to row in the England squad. 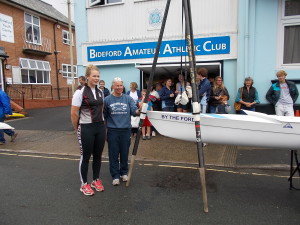 Bideford Amateur Athletic Club is truly grateful to the Bideford Bridge Trust and Tina Robertson for their very generous support of the club.

The photo shows Alice Jackson with Tina Robertson, owner of By the Ford naming the new boat.

Crews from the Bideford Amateur Athletic Club travelled to Exeter this weekend to take part in the 2015 City of Exeter Regatta. Good conditions welcomed the crews for the 400m sprint course.

The club had a very successful day notching up four wins and some pretty impressive performances.

The first win of the day for the Blues was by the men’s master’s fours crew consisting of Colin Pennington, Steve Clements, Nigel Cann, Neil Pennington with cox Chloe Pennington.